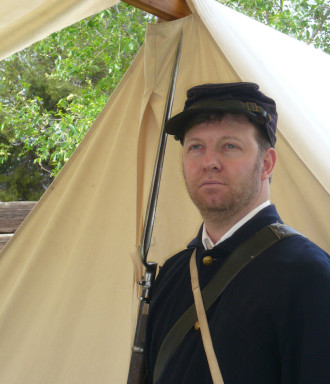 Josh has been a performer in military and western re-enactments for over half a decade with credited television and film experience.

He credits this work with helping him to craft more realistic stories.

BURIED VALUES was created to tell exciting action-adventures with the kind of sexy and edgy writing Josh has always been a fan of - as well as talk about very relevant contemporary issues, backed with information gathered from extensive research.

The juxt of Buried Values is not that it's the lost Civil War treasure awaiting the characters deep down a sink-hole full of death - or the family rivalries that will go on through the wealth of American history. It is that Buried Values are what's really deep down inside each of us, and they're often selfish and ugly, and our own human nature often winds up being the cause of the death of ourselves.

There's a lot to think about between the lines in Buried Values. The reader falls with their favorite character they most identify with down a slippery unethical slope that's harder and harder to see until both realize what really lies behind their eyes.

An effort is being made to present most if not all characters in both their best and worst lights.

Contemporary times do not reveal a society that is more decadent and self-destructive than it ever was before. Many nostaligcally yearn for days of old where they imagine some traditionally conservative society. But every society that's come and gone has been one with its human architects and all  their BURIED VALUES with them from the beginning to the end. That's why history repeats iteself.

The Truth has Value.  Class is just an Act.